How the low temperature concepts can be applied for operational high temperature district heating networks? This report uses an example from Belgrade to illustrate and detail the guidelines of the RELaTED Development Schemes for new DH developments in new urban environments. 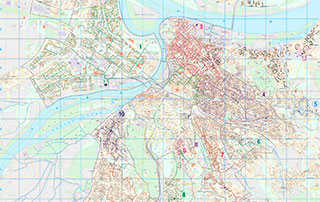 The guidelines of RELaTED Task 2.6 are in general terms, based on best practice as most DH networks are different in relation to visions, DH network topology, temperature levels, building installations, tariff structure, management etc. This article focuses on the practical implementation of the transition schemes in the DH network in Belgrade.

Belgrade is the capital of Serbia with about 2.000.000 inhabitants. It has a moderate continental climate. For the heating of more than 50% of apartments, PUC “Beogradske elektrane” is in charge, a district heating company founded in 1965.

The heating season lasts for maximum 7 months. With the installed power of 3GW in 40 heat sources, the annual production of heat energy of 3600 GWh, district heating network of 750 km long and 9000 substations are one of the largest heating systems in the region. The heating system is divided into 5 DH networks: Novi Beograd, Dunav, Konjarnik, Cerak and Vozdovac.

The existing DH system in Belgrade is based on natural gas as the main fuel. The vision is to reduce CO2-emissions by phasing out the fossil fuels. A more detailed overview of the vision for the development of new sources for heating purposes in Belgrade is given in RELaTED report D.2.1. Chapter 7.3

The Strategy for the Development of Belgrade District Heating envisages a reduction of natural gas from 90% to 26%, which will be enabled primarily by the use of waste energy from the Obrenovac Thermal Power Plant (with a share of 55%), and then from the energy from the waste incinerator and renewable sources (with a share of 9 %).
Using these new energy sources requires interconnection of the existing DH networks into a common system with an interconnection ring transmission line and efficient energy management. In order to reduce the outgoing temperature in the DH system and reduce the required energy for heating, it is necessary to simultaneously perform energy retrofit of building installations in accordance with the applicable regulations.

For newer buildings grouped in the one subnetwork the long-term plan is to install BILST and lower the temperature in that part of the network by construction of mixing shunts.

Previous renovation of the substations in Belgrade performed in 2008-2012 has been financed by credit from EBRD, and also financed by local contributions.

In the RELaTED project two substations in will be renovated financed by EU commission. For future renovations in order to decrease the temperature and use renewable energy sources options investments could be local contribution and credit financed such as EBRD or KfW

For the end users the lower temperature concept in the existing network is expected to result in a lower price for heating energy. 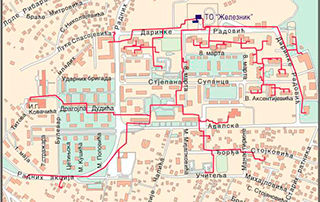 One smaller generation plant with main network and subnetwork.

The current 5 networks are constructed as centralized solutions with a larger plant in each network that covers the whole area. Their average age is about 20-25 years. The temperature regime is the same in all of the network and there are no subnetworks or sectioning with different temperature regimes, so lowering the temperature will be done for the whole network.

Most of the substations in the networks are already renovated in 2000-2012. and the temperature is lowered considerably, from 150°C to 120 °C. In the same period the design temperature has been changed from -15 °C to -12 °C.

Decreasing of the temperature will first be done in the several subnetworks. When all other substations are reconstructed with BILST temperature in whole network will be reduced centrally in the generation plant
Installing of BILST in newer buildings grouped in one subnetwork is a short-term plan, that will enable lower temperature regime in that subnetwork down to 60 oCAfter implementation of the RELaTED demo project and testing results within the next year it is realistic to make engineering calculations of BILST for selected newer buildings.

In order to obtain LT concept, the main task for now is to renovate older buildings in order to lower the energy demand.

In order to obtain LT concept, the main task for now is to renovate older buildings in order to lower the energy demand. Mostly buildings in Belgrade are uninsulated or have unsatisfactory level of insulation. This renovation will probably take many years and it will depend on decision and financing from building owners or the City of Belgrade. After that process it is expected that the current annual heating demand of 140KWh/m2 for existing buildings will be reduced by at least 30% when renovated and make conditions for further temperature decreasing.
Currently the heat source in Belgrade is a gas boilers with 90-92% efficiency.

In order to reduce consumption of gas as priority heat power in near future the plan is to use waste and renewable energy according following plans:

The plan is to lower the supply temperature in the winter from around 100 °C to around 90 °C, and in the summer months to around 70 °C.

The plan is to lower the supply temperature in the winter from around 100 °C to around 90 °C, and in the summer months to around 70 °C.

Existing substations are located in building basements and covers one on more buildings with heating depending on their capacity. Average substation capacity is 350 KW. Mostly of them are indirect type with plate heat exchanger for SH.

SH and DHW are distributed in separate pipes to the buildings where it is consumed. For more info about existing installation see the RELaTED D2.2 report section 6.3.2.

In the previous decade PUC Beogradske elektrane have already renovated primary and secondary side of the substations. All substations are modernised with heat meters, regulating valve and controller in order to maintain quality-quantity regulation of flow and temperature in relation to the outside temperature. On the secondary side tube heat exchangers are replaced with plate heat exchangers and old circulation pumps are replaced with new ones (mostly frequently regulated) and branches has balancing valves mounted.

Not so many exceptions are possibly in network without actually compromising the overall system. For old buildings that have not be renovated (for example historically protected buildings) it is possible to increase the flow rate when the whole network is converted to LT. This increase of flow is limited, and it need additional engineering calculations to prove the concept.

In relation to reducing the temperature, it is also expected that the heat losses in the network will be reduced. There hasn’t been done any calculations for this. The effect of the reduction can potentially be greater if additional repair of worn out pipes or worn insulation on pipes is done. The plan is that in future interventions pipelines will be changed from pipes in channel to preinsulated pipes. There are no plans for this renovation process as of now because the financing is not in place, so this could probably take many years

With the reconstruction of substations (done in 2000-2012) the temperature in the networks is already lowered from 150°C to 120°C without changes to the delivery conditions and technical building specifications.

According to the local building regulative all new buildings shall have thermostatic valves and allocators on radiators. A large investment in the future is installation of thermostatic valves and allocators on radiators in existing buildings. It will probably take many years for this to happen and there is no plan for it as of now. These investments will be financed either by building owners or the City of Belgrade.

If the energy systems is retrofit in existing buildings the local Building regulation must be followed.
The tariff structure will not be changed due to the temperature decrease, but the energy price will be lowered.

Beogradske elektrane and City as local investor founder, will be in charge of all parts of the future project development regarding optimization of the DH network.