District heating networks can be fed by various heat generation sources, including combustion plants (based on fossil fuel or biomass), CHP (combined heat & power) plants or renewable-based plants. The characteristics of each of these heat technologies are outlined in this article. This review is included in the document “D4. 1 – Energy Price Assesment”, that provides an insight to energy cost in the context of district heating.

The combination of multiple heat sources is beneficial, especially for large district heating schemes, as it allows shifting from source to source depending on specific conditions and market prices. In Figure 1 is shown the heat production mix for European countries. 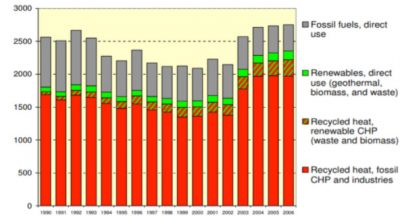 The trend for last decade was to increase CHP and the objective for the following years is to inject renewable and waste heat sources.

As a summary, typical features (application, cost, production and performance levels) for each heat generation technology are listed in Table 1. More specific information on these technologies is provided in the relevant subsections.

Heating technologies for district heating. References at the end of this paper.

Boiler stations are specifically dedicated to the generation of thermal energy, which is produced through combustion of fossil fuels (such as natural gas, heating oil, coal), renewable-sourced fuels (biomass), or incineration of solid waste. The transmission medium is typically water or steam.

As co-generation plants (described in the next section) are becoming more common (due to the advantage of providing electric power as well, unlike boiler stations), fossil-fuelled heating plants are currently built only as a back-up for peak load coverage or for small utility networks. Their installed power is usually limited (up to 5 MW), while combined heat and power is favoured for larger units.

In the case of fossil-fuelled boiler systems, the main advantage is provided by their centralised layout, which allows a more efficient removal of pollutants, compared with individual decentralised systems. While they also provide a higher efficiency than individual systems, this advantage is offset by distribution heat losses in the network. In special cases, condensing boilers can be used in such heating plants for improving their efficiency. The combination of boiler stations fired by different fossil fuels within a district heating scheme can also avoid the dependence on one energy source.

Biomass-fired heating plants are being promoted within the EU since they provide a more sustainable energy source.

Conversion efficiencies of modern boiler stations are usually above 97% (based on lower heating value), and can exceed 100% if flue gas condensation is used [2]. Older coal-fired power plants used to have a much lower efficiency in the range of 30-40%.

Biomass-fired heating plants are being promoted within the EU since they provide a more sustainable energy source. Thermal energy is usually generated by the combustion of pellets, wood chips or residual wood products. Wood pellets are not economically advantageous for plants above 1–2 MW, as alternative fuels become less expensive for plants above this range. Large volumes for fuel storage can be helpful in securing provision and minimising deliveries.

Waste-to-energy district heating plants are based on the incineration of waste in a furnace. In this way, part of the energy content of the waste is recovered.

Unlike in boiler stations, which are specifically dedicated to the production of thermal energy, in combined heat & power (CHP) systems thermal energy is produced as a by-product of electricity generation. The cogeneration of heat and electricity is more efficient than the boiler systems mentioned above, as the waste heat from electricity production can be recovered. This is achieved through a power station or heat engine that simultaneously generates electricity and heat. The provision of cooling is also possible through this technology, by using absorption chillers to produce cold from by-product heat (100–180 °C).

CHP plants for district heating are typically sized for providing approximately half the peak load [1], with peaks provided by boiler systems.

Typical fuels for cogeneration are not different to conventional power plants: natural gas, oil, renewable sources (biomass, solar thermal, geothermal) or solid waste. There is also the possibility of integrating solar PV generation. This distribution of fuels for EU-27 is shown Figure 2.

Gas-fired CHP is a well-established technology scalable to different sizes. Direct biomass CHP is currently technically and economically viable for large-scale plants only (above 10–20 MW). Gasification and ORC (Organic Rankine Cycle) technologies can be used to run smaller plants from biomass. Energy from waste is currently used for large-scale schemes, but it is expected that new technology developments will allow its adoption at smaller scale. 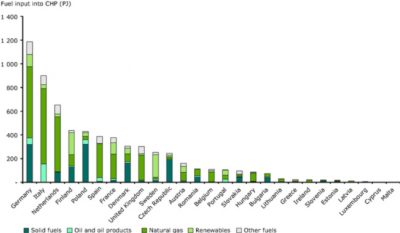 The European Union promotes cogeneration through its 2012/27/EU directive [9], with the double aim of increasing energy efficiency and securing energy supply.

Solar thermal plants are divided into Central solar heating plants (CSHP) and Building Integrated Solar Thermal Systems (BISTS). CSHP systems are large and centralized systems, usually situated far away from consumption point. On the other hand, BISTS are distributed systems installed near to the consumption point.

Firstly, CSHP provide hot water, heated by arrays of solar thermal collectors. In the case of centralised installations, the collectors are usually installed on the ground (as opposed to individual installations, which are usually installed over rooftops). This is especially true for Nordic countries, where industrial and agricultural land can be found at relatively low price.

Solar plants deliver the highest output in the summer season, when district heating load is low.

Solar plants deliver the highest output in the summer season, when district heating load is low.

Due to the intermittent nature of solar energy supply, large-scale thermal storage (diurnal or seasonal) plays an important role for achieving a high solar fraction in these installations.

The usual sizes of collector arrays range between 5000 and 50000 m², providing a thermal power from 3 to 50 MW. The largest solar system of the world, installed in 2017 in Silkeborg (Denmark), is an exception in that it doubles the capacity of the high end of the typical range [14].

If suitably protected, solar collectors can work below freezing temperatures and should be protected from overheating on hot sunny days.

The market for large-scale solar water heating is experiencing a fast growth in Northern Europe [1]. In global, the technology has declined by 4,7% in 2017, but positive market developments were recorded in many countries, such as China or India.

The market for large-scale solar water heating is experiencing a fast growth in Northern Europe.

When used for district heating systems, to guarantee energy supply, solar heat plants are with any other heat generation sources for district heating. Solar heat has high investment costs and low operational costs, and so its environmental and economic feasibility needs to be assessed. Generally, solar heating plants are most efficient when combined with gas-fired boiler stations and CHP systems, as these are quick to start and stop and therefore allow a better exploitation of the energy provided by solar plants.

The current production price for solar heating plants is >0.03 €/kWh in Northern Europe and >0.02 €/kWh in Southern Europe [10]. However, the cost is very dependent on the scale of the system, as shown in Table 2.

Secondly, the BISTS have similar characteristics as the CSHP. The mayor difference resides in the size of each system and in consequence, in the output heat production. These systems are not designed to reach a specific heat production. These systems are constructed under the restrictions of size of each localization. Basically, it can be installed into the rooftop of buildings, where the solar radiation is the highest and if a higher solar fraction is required, it can also be installed into the façade. For the last application, unglazed solar collectors are the most appropriate due to its architectural characteristics. The prices for BISTS can be also interpolated from the prices from Table 2.

Heat pumps allow for heat recovery from the ground (geothermal heat pump systems) and alternatively from other low-grade heat sources such as sea water or treated sewage water. It is shown in Figure 3 the potentiality density of this heat source in Europe. 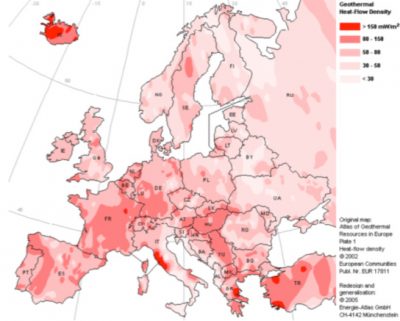 Heat pumps use electricity (electric HP) or thermal energy (absorption HP) as their main primary energy source, and are able to upgrade low-temperature heat sources to higher temperature levels. Since electric heat pumps can convert electricity into heat with very high efficiency, they can be very advantageous for district heating systems that have renewable electrical generation systems with intermittent supply. Heat pumps in district heating systems typically have coefficients of performance (COP) ranging between 1.7 and 3.8, but modern heat pumps can reach even better values [8].

The main advantage of heat pumps is that they can make use of energy from low temperature sources.

The capacity of large heat pumps is usually in the range of 25 kW to 5 MW. For covering a bigger capacity, a number of heat pumps are usually laid out in parallel.

The main advantage of heat pumps is that they can make use of energy from low temperature sources. Therefore, they provide great flexibility for the use of renewable, waste and surplus energy.

Waste heat from industrial processes, solid waste incinerators or other applications can be recovered using heat exchangers or heat recovery boilers. Most of the energy currently used for district heating in the European Union comes from waste heat from power stations, as shown by Figure 1. Preferably, the heat source should be close to the distribution plant and its temperature should be above 100 °C [12]. In particular, waste heat from nuclear power stations has a high potential as an energy source for district heating, which could be exploited by countries such as France and the UK [1].

Waste heat from nuclear power stations has a high potential as an energy source for district heating, which could be exploited by countries such as France and the UK.

Geothermal district heating, using low-temperature ground-sourced heat, has been used since a long time ago but is only available at specific locations, requiring abundant geothermal heat within a short distance of the heat demand area [2]